Have you ever thought about killing someone? Of course you have. Will you do it? Most people won’t, but some do. What would push you into ending a person’s life – self-defense, revenge or hate? Is it right to execute a murderer, or is it a case of severe double-nature? If you got the chance to kill someone, or be killed by someone, and it was fiction – what would be your murder of choice? These are the things that “Zero Killed” focus on.

In 1996, random people from all over the world were offered the chance to make their own short films about their murder fantasies. There was only one rule set: they have to act in them as well. Either as the murderer, or the victim. Now, many years later, they meet these people again and question them about their films and the motives behind them, as well as discussing the many sides of murder.

The short films we see differ heavily in style as well as murder of choice. Several of them portray shootings – either just execution by gun, or more along the lines of school shootings. Obviously, a lot of people went the route of torture – probably the most common style to go for. Everyone has imagined themselves torturing some asshole who has done them wrong, and the brutal things they would do to them before ending their lives. But then we have the short films that are either more creative, or just go for a different kind of murder entirely. A woman guiding a hitman through IMs, knowing that she has the power to end a life by just typing. Or the one I felt was the strongest, most effective and intense to watch – a suicide by poisoning. Many of the murders are gory, but this one is completely without blood and is effective because of the matter-of-fact-style, and the acting by the young man on screen. In many of these, you’ll recognize your own fantasies, but some of them also come off as strangely planned out. And that’s because people think about murder, it’s a fact and this documentary proves it. END_OF_DOCUMENT_TOKEN_TO_BE_REPLACED 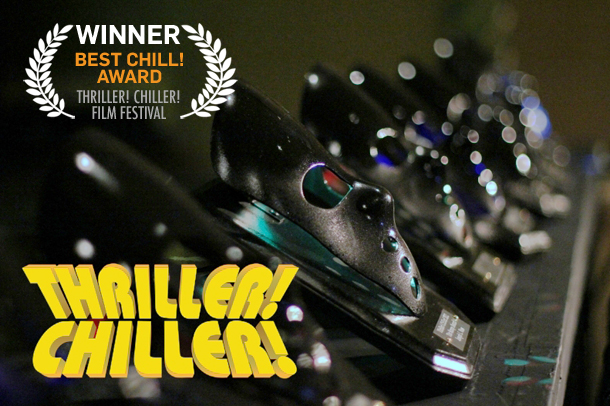 We are proud to announce that ‘Zero Killed’ has won the Best Chill! Award at the Thriller! Chiller! Film Festival in Grand Rapids, Michigan, USA. Thanks to all the participants and crew that made this film possible!

‘Zero Killed’ is also part of the Killer Film Fest Online! Check it out!